This Maguro Cutting was not held at the famous Tsukiji Fish Market in Tokyo,
but on the 5th floor of Isetan Department Store, Bangkok. 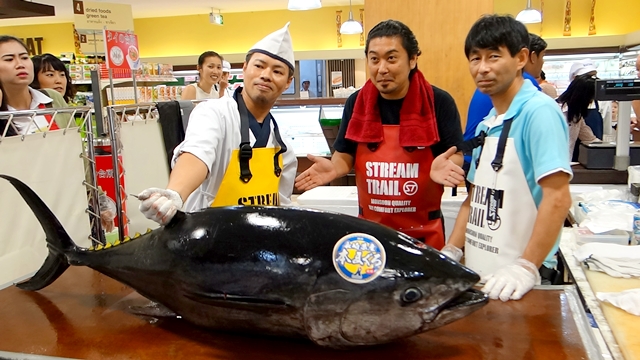 Mr. Niimi, a Japanese chef, came with his knives and prepared them on the cutting table.
He and his assistants took out a giant Maguro (Blue Fin Tuna) just imported from Nagasaki, Japan, from a foam box and lay it down on the table.

First, Chef Niimi grasped his biggest knife with his right hand and held Maguro body with his left hand.
A few seconds later, Chef Niimi’s knife sliced into the large Maguro head and he quickly cut it out.
At the beginning of the demonstration, when he easily cut the spine of the head, w
e have just realized that only with the well trained skill and the well maintained knives can make this possible. 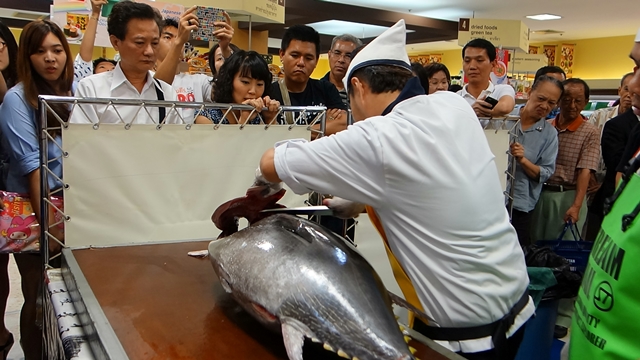 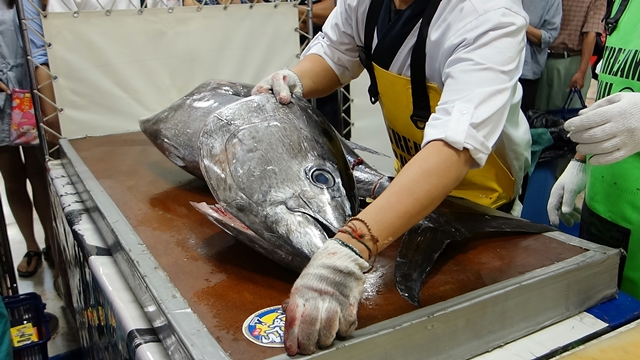 Then Chef Niimi slowly cut the meat out of the spine. The half of the Maguro’s body was taken out into two large chunks,
one is dorsal part and another is belly part. One of his assistants used smaller knife to cut a chunk into several smaller chunks for sale.
The small chunk called “Saku”. The Saku can be sliced into small pieces for Sashimi or Sushi. 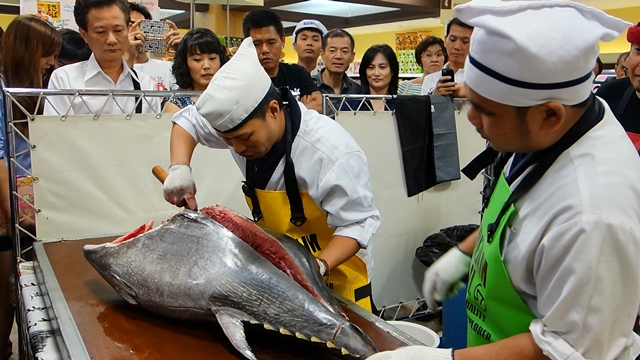 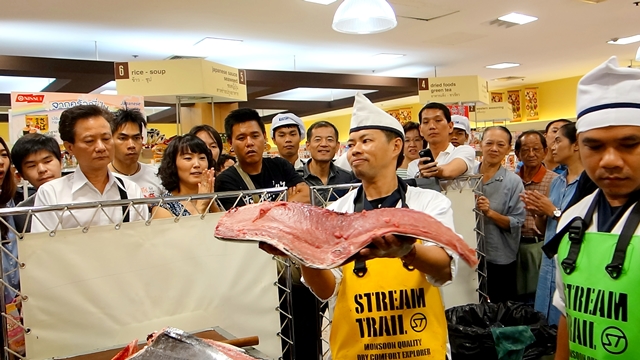 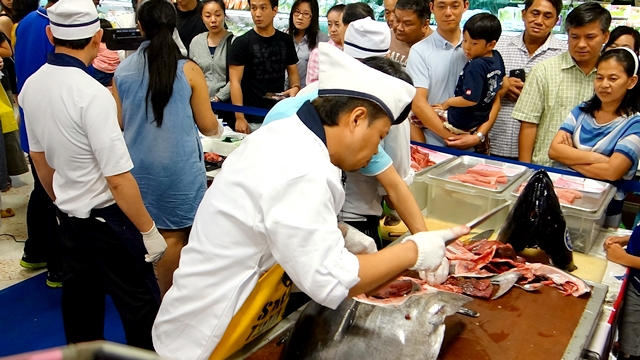 If you are a fan of a Japanese food or a sushi lover, you may know that Maguro Sashimi or Sushi comes into three main grades – the first is ‘Akami’ which is red and normally seen for sushi or sashimi..
After the Akami is Toro which come from the belly part. It is fattier and can be divided into two parts; “Chutoro” and “Otoro”.
The Chutoro is medium fatty, found next to the Akami down towards the belly tip of the fish.
Otoro is the fattiest and most adorable part.
Otoro which is easily melt in your mouth, is considered most “Umami”, deliciousness. It is also ridiculously expensive.

We have just noticed that there were a lot of meat between the bones as such a large fish has large spine.
The leftover fresh on the spines is called “Nakaochi”. His another assistant carefully collected the Nakaochi for sale as well.
After the demonstration, we tasted Akami, Chutoro and Otoro. The Maguro, especially Otoro, looked more like a slice of marbled beef steak than a piece of fish.
Once put in your mouth, there is no need chew. You just close your eyes and let it melt in your mouth.
If you want to have the best taste of Otoro, you should have Otoro with good Sake, the Japanese rice wine.

At the end, my son wondered and asked Chef Niimi how we could eat the big Maguro head which was first cut out.
Chef Niimi kindly offered that he would bake it for him at a restaurant if he would like to taste it.
We then decided to follow the head of Maguro to the restaurant on Sukhumwit Road.
It was our first experience to have Maguro head and it was really worth to trace it! 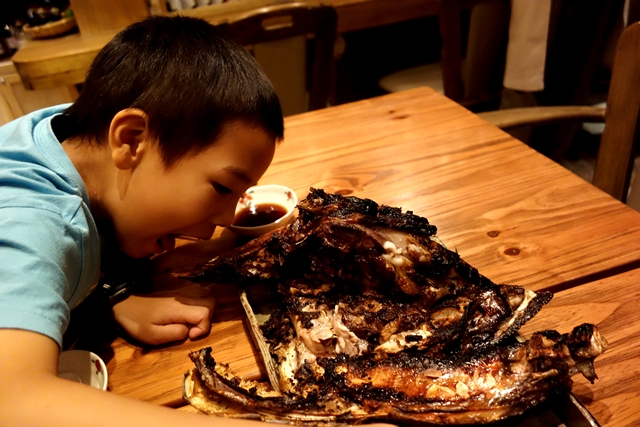